According to the U.S. Department of Justice (DOJ), 3M, has paid $9.1 million to resolve a defective earplug lawsuit alleging that it sold defective Combat Arms Earplugs, Version 2 (CAEv2 earplugs to the military from 2003 to 2015. The now-discontinued 3M CAEv2 earplugs were reportedly standard-issue for military servicemembers deploying to Afghanistan or Iraq from 2003 to 2015. The defective earplugs may have caused significant hearing loss in military veterans. Current and former military servicemembers who served after 2003 may be entitled to compensation from 3M for their hearing loss.

Manufactured by Aearo Technologies, 3M Combat Arms Earplugs were standard issue to U.S. military personnel deployed to Iraq and Afghanistan from 2003 to 2015, according to Stripes. The earplugs, which were designed to offer 2 levels of hearing protection depending on the user’s needs, were manufactured too short at the stem, which didn’t allow the plugs to go deep enough into the ear, according to the suit. The complaint further alleged that 3M earplugs allowed ”damaging sounds to enter the ear canal.” This to our law firm is a design defect that we are looking to see if our clients will be entitled to compensation for their hearing loss. 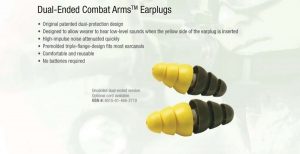 In July 2018, 3M agreed to pay a settlement of $9.1 million to the U.S. government for selling the defective earplugs to the military. The whistleblower lawsuit claims that there was a product defect leading to product liability that 3M had to pay.

“Government contractors who seek to profit at the expense of our military will face appropriate consequences,” said Chad Readler, Acting Assistant Attorney General of the U.S. Justice Department’s Civil Division.

Although the lawsuit has been resolved, all claims within the settlement will end as allegations only, as 3M has admitted no liability in the case. We are offering free case evaluation to those seeking help in this matter.

The company sold its earplugs to the US military without disclosing problems with its effectiveness. The earplugs would come loose in the ear canal and not perform as well. Those curious about the lawsuit should look up United States ex rel. Moldex-Metric v. 3M Company, case number 3:16-cv-1533-MBS (DSC). (Note: I grabbed a photo of the earplug type from the 3M website, but the photo above may not be exactly the same earplug variant.)

“The Department of Justice is committed to protecting the men and women serving in the United States military from defective products and fraudulent conduct,” said Acting Assistant Attorney General Chad A. Readler of the Department’s Civil Division. “Government contractors who seek to profit at the expense of our military will face appropriate consequences.”

“Through rigorous enforcement of the False Claims Act, we protect taxpayer dollars from waste, fraud, and abuse,” said U. S. Attorney Sherri Lydon for the District of South Carolina. “And in this case in particular, we are proud to defend the integrity of our military programs and ensure that our men and women in uniform are adequately protected as they serve our country.”

“Today’s settlement will ensure that those who do business with the government know that their actions will not go unnoticed,” said Frank Robey, director of the U.S. Army Criminal Investigation Command’s Major Procurement Fraud Unit. “Properly made safety equipment, for use by our Soldiers, is vital to our military’s readiness. Our agents will respond robustly to protect the safety of our military.”

“This settlement demonstrates the commitment of the Defense Criminal Investigative Service and our law enforcement partners to hold companies accountable for supplying substandard products, in particular products that could directly impact our service members’ health and welfare. DCIS protects the integrity of Defense Department programs by rooting out fraud, waste, and abuse that negatively affect the wellbeing of our troops,” said Special Agent in Charge Robert E. Craig, Jr., DCIS Mid-Atlantic Field Office.

Hearing loss and tinnitus are some of the most common disabilities for veterans, we are looking into these claims for the veterans who have lost their hearing and have tinnitus due to 3M’s defect failures.